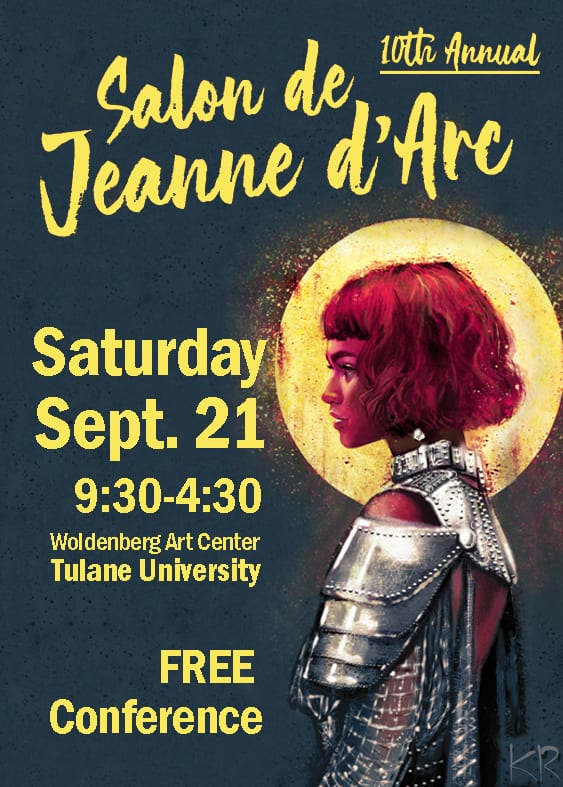 The Joan of Arc Project will present its 10th annual conference, the Salon de Jeanne d’Arc, on Saturday September 21st from 9:30 a.m. to 4:30 p.m. at Woldenberg Art Center at Tulane University.  (full schedule) The free lectures and presentations, made possible with generous support from the Medieval & Early Modern Studies Department at Tulane University and Newcomb Art Museum of Tulane University, will be held inside the Stone Auditorium in Woldenberg Art Center, with information tables and parade related exhibits in the adjacent Woodward Way Breezeway of the Newcomb Art Museum (map).

Throughout the conference, attendees can meet and greet krewe leaders and members or become a krewe member, and view costumes and other items related to the 12- year-old walking parade that marches each Twelfth Night in the French Quarter on Joan of Arc’s birthday, January 6th.  Members may also purchase throws and other krewe merchandise.

Presented by the makers of the annual Joan of Arc Parade

Lectures will be held in Stone Auditorium in Woldenberg Art Center; Krewe de Jeanne d’Arc information tables and meeting and mingling will occur in the Woodward Way Breezeway in the Newcomb Art Museum. (map)

The Event is Free and Open to the Public

9:30 a.m. Welcome: Coffee & Croissants!
Doors open before the first presentation so you can meet members of the Joan of Arc Project over breakfast goodies provided by Maurice’s French Pastries.

10:15 a.m. KEYNOTE SPEECH: The Middle Ages in the Popular Imagination,
by Adam McKeown, Ph.D., Director, Department of Medieval and Early Modern Studies, Tulane University.  The Middle Ages continue to captivate the popular imagination, most recently with television series like Game of Thrones and Vikings. This presentation looks critically at the contemporary fascination with the Middle Ages, from Ivanhoe through Tolkien and Harry Potter to the Song of Ice and Fire and discusses how enduring anxieties about modernity, identity, and globalism are channeled into our representations of medieval Europe. McKeown teaches and writes on sixteenth- and seventeenth-century English and Trans-Atlantic literature. His particular areas of interest are visual culture, community, and rhetoric. His Ph.D. is from New York University and his B.A. and M.A. are from the University of New Hampshire.

Afternoon sessions will focus on Tchaikovsky’s “Joan of Arc” opera, to be produced by the New Orleans Opera February 7 and 9, 2020

1:00 p.m. Joan of Arc as a Subject of Opera and Musical Theater, by New Orleans Opera Director Robert Lyall. How is an individual whose life is almost fully documented in historical writings treated when she is portrayed on the stage? How important is factual accuracy in developing a true characterization for the theater? In addition to his twenty-year tenure as general and artistic director of the New Orleans Opera, Maestro Lyall has directed the Knoxville Opera (TN), the Opera Grand Rapids (MI), the Mississippi Opera, the Victoria Symphony (TX) and the Oak Ridge Symphony (TN), and has guest conducted symphonies, ballets and operas all over the world.

1:45 p.m. The Redemption of Pyotr Ilyich Tchaikovsky, by Richard Balthazar. Describing his own long involvement with the subject of Joan of Arc as well as Tchaikovsky’s spiritual and literary themes, Balthazar will discuss his experience of twice translating Tchaikovsky’s own Russian libretto of the opera for singing in English.  He will remark on problems encountered forty years ago in his first translation for the Canadian Opera Company and explain how he has solved them in this new translation for the New Orleans Opera. From an academic background in Slavic Languages, Balthazar moved on into working as an arts organization administrator.  In his later working years and after retirement, Richard wrote books in fiction and nonfiction, played at sculpture, and became a serious graphic artist.

2:45 p.m. Medieval Fashion Show. Participants in the costume workshop series co-sponsored by the Krewe de Jeanne d’Arc and the Gulf Coast Costumer’s Guild will show off their final designs.

3:30 p.m. Costuming Joan of Arc, by New Orleans Opera Costume Master Julie Winn.  Focusing on a particular costume piece, Winn will talk about the design process from the beginning to end, including how she researches the subject, how she finds materials and how she makes it all work within budget constraints. Winn’s career as a costume designer has spanned 40 years. She’s designed costumes for theatre, musical theatre, dance, figure skating, film including music videos and commercials, and now opera. She interned in the costume shop at The Juilliard School in NYC. She is an experienced seamstress, wardrobe person, milliner and prop designer.

4:15 p.m. Last chance to visit the merchandise and info tables or network in the breezeway

The purpose of the Joan of Arc Project aka Krewe de Jeanne d’Arc is to honor and celebrate Joan of Arc’s life in unique, artistic, and educational ways, including the production of the annual Joan of Arc parade and Salon de Jeanne d’Arc. We seek to keep Joan’s story and spirit alive by hosting events, workshops, and presentations that illuminate Joan’s heroism and timelessness, while connecting her to the French heritage and pride of New Orleans. As the “Maid of Orleans” inspires citizens of New Orleans and people around the world, we welcome people of all faiths and backgrounds to join in our joyous, New Orleans-style revelry.