The Krewe de Jeanne d’Arc’s primary purpose is to put on an annual walking procession (see route map) celebrating the January 6 birthday of Saint Joan of Arc and year-round events celebrating the Maid of Orléans and New Orleans’ French heritage.  Joan of Arc is the patron saint of France and the unofficial patron saint of New Orleans. Joan was the military hero of our namesake city Orléans, France, and her golden statue in the French Market, a copy of one in Paris, was a gift to the city of New Orleans from the French people. Now gearing up for our 14th annual procession in the French Quarter, the group was founded in 2008 by Amy Kirk Duvoisin, and is now directed by co-captains Amanda Helm and Antoinette de Alteriis. 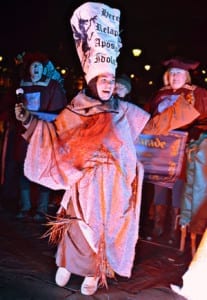 Our medieval-style procession is set in Joan’s time, 1400s France, with medieval costumes and music, characters on horseback, jugglers, knights, stiltwalkers, giant puppets, king cake and handmade medieval throws. In New Orleans, January 6 is also still celebrated as Twelfth Night, an old medieval holiday which is the kick-off to the Carnival season. We are a secular group, and  we welcome anyone with an interest in Joan of Arc, be they Catholic or non-Catholic, artist or non-artist, French-speaking or not. We are an eclectic, authentic New Orleans blend of whimsical and reverent, sacred and secular, spectacular and contemplative. 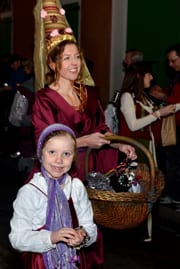 We are a family-friendly krewe with membership open to men, women and children, and our short 14-block walking procession is just right for young and old legs.  Besides our procession, we celebrate our “Maid of New Orleans” and New Orleans’ French heritage throughout the year with various events. We host an annual Salon conference exploring everything from Joan on film and stage to Joan’s canonization, from French language to medieval heraldry workshops. We sponsor the Joan of Arc online library project.We participate in various French cultural events throughout the year through our association with the Council of French Societies.

We also have organized several public prayers and pep rallies at her golden statue in the historic French Market asking for Saint Joan’s intervention with everything from the New Orleans Saints to the BP oil spill. The Krewe de Jeanne d’Arc is a 501c7 nonprofit organization (social club, not tax deductible). However, consistent with standards for a 501c3, we spend around 60 percent of our budget directly on the public procession and educational events, with the remainder going to members-only events and operating expenses.