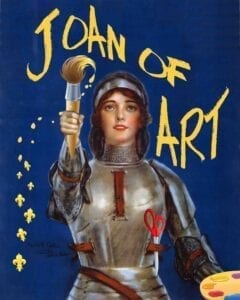 At first glance, this sword dating 300 years pre-Joan might not seem relevant to her, but the Crusades certainly shaped her and her country…

“By Joan’s lifetime defeat, civil war and occupation had eroded the ability of the French to make even a minimal contribution either to the ongoing vision of recovering Jerusalem or to the rapidly growing need to hold back the Ottoman advance…
But even in this time of crisis and despair France’s crusading legacy shaped thought and behaviour, including those of Philip the Good of Burgundy and the members of French chivalric orders (Paviot, Blaise-Groult). Joan of Arc was not immune to the allure of crusade.”

900-year-old sword dating back to the Crusades found at the bottom of the Mediterranean Sea
An amateur diver uncovered the four-foot long sword, which likely once belonged to a Crusader knight almost a millennium ago. ... See MoreSee Less

I'm an atheist. Joan is my favorite saint. Anything that honors her is OK with me.

Is The Last Duel based on a true story?

“In short, yes. The first two chapters of the three-act film, penned by Damon and Affleck, draw heavily on Jager’s research, recounting Marguerite’s rape and the events surrounding it from the perspectives of Carrouges and Le Gris, respectively. (Jager offered feedback on the film’s script, suggesting historically accurate phrasing and other changes.) The third and final section, written by Holofcener, is told from Marguerite’s point of view. As Damon tells the New York Times, this segment “is kind of an original screenplay … because that world of women had to be almost invented and imagined out of whole cloth.”

The True History Behind 'The Last Duel'

Our friends at New Orleans Opera Association are presenting "THE FRENCH CONNECTION", a full concert of French music that premiered at the French Opera House.

That is so cool!

Wonderful story of Mark Twain’s “encounter” with his heroine. Boy would he love our parade!