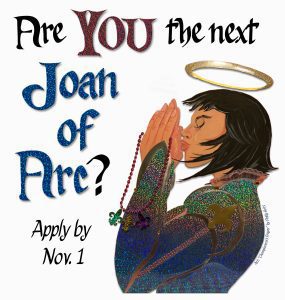 DEADLINE: November 1, 2022
The Krewe de Jeanne d’Arc announces its annual student Joan of Arc competition for French-speaking young women in New Orleans. The winner will be chosen to ride on horseback as the star of our annual French Quarter saint procession on January 6, 2023. This contest is modeled after the contest held annually in Orléans, France, when they select a local girl to lead their military parade celebrating Joan’s victorious lifting of the siege of Orléans from the British in 1429.  NEW THIS YEAR!!!! Our winner will get a travel scholarship to France to meet the French young Joan and represent New Orleans in our sister city!

FREE TO ENTER: There is no fee to enter the contest. The Krewe de Jeanne d’Arc will provide the majority of the costume (student may need to provide some clothing like thermal underwear, beneath costume) for the selected Joan.

Eligibility: This contest is open to young women, 16-19 years old (the ages of Joan’s most notable feats and trial), who have shown unique leadership abilities and are currently or have recently studied French in high school, college, or at home. (The candidate must be able to speak some French in conversation and be able to represent Joan for media opportunities, public presentations, and in the parade). This contest does not discriminate on the basis of race, religion, national origin, ancestry or creed. The three top candidates will receive a brief phone interview to assess French fluency and confidence so we may choose the best possible candidate. 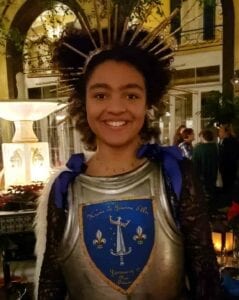 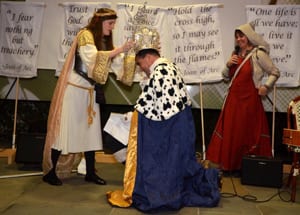 2012 Maid Aggie Bell crowns our 2012 King Charles VII, Damien Regnard at the king cake ceremony at the end of the parade 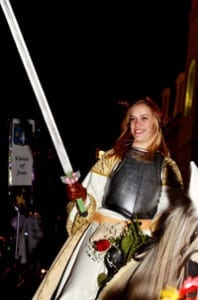