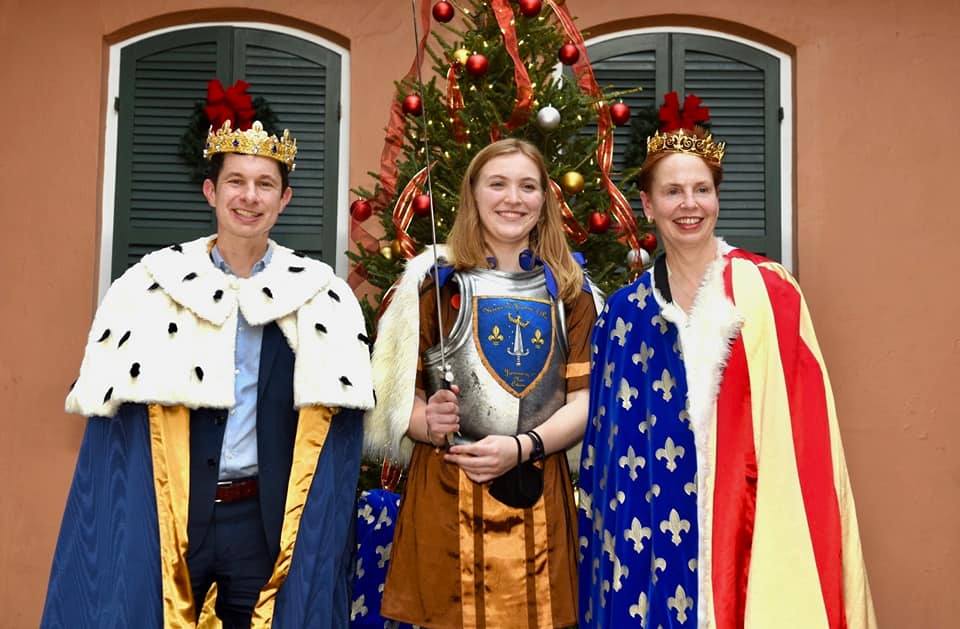 The Maid of Orleans for 2022 will be portrayed by Ava R. Wilkes, a freshman at Washington and Lee University and resident of New Orleans. She is the daughter of Andrea and Ren Wilkes and attended École Bilingue, Audubon Charter School, and Benjamin Franklin High School. Ms. Wilkes won the contest held to select the young woman who best represents the qualities of Joan. She was a member of the Mayor’s Youth Advisory Board and continues to be a voice for her community. In her acceptance speech, given in French and English, Ms. Wilkes said, “Joan of Arc inspires us by remaining true to herself despite all odds. Through the weapon of her faith, Joan of Arc was able to change the course of history. Joan knew how to set an example for her community, and instill values and ideas that, while unorthodox, shaped the world around her for the better.”

Look for our young “Maid of Orleans”, Jeanne d’Arc, on horseback in the parade. Midway through the parade, she will receive her sword after a blessing by the Very Reverend Phillip G. Landry at St. Louis Cathedral. The sword she receives was a gift to the Krewe de Jeanne d’Arc from the city of Orléans, France, whose 500-year parade tradition was a model for our selection of a young Joan.  Finalists receive an interview in French and English by the Cultural Attaché/ Chargée de Mission Culturelle of the Consulate General of France in New Orleans. The annual contest is open to all young women in the Greater New Orleans area ages 16-19 who have demonstrated outstanding community leadership and have French language experience and skills.

Queen Yolande for 2022 will be portrayed by Ti Adelaide Martin, co-proprietor of Commander’s Palace. Ms. Martin is also the founder of the New Orleans Proud to Call it Home campaign, co-founder and chair of New Orleans Culinary and Hospitality Institute, and a driving force behind the new airport terminal. Ms. Martin is an inspiring mentor to young women and embodies the spirit of Queen Yolande in her support of the community.

Queen Yolande will be riding in a royal “horse-drawn” pedicab, dressed in a cloak composed of the coat of arms and heraldic colors of the historical Queen Yolande.

KING CHARLES VII:  The “Dauphin” who became King due to Joan of Arc’s efforts is portrayed in 2022 by Joseph Andre Mistrot III. Mr. Mistrot is the current 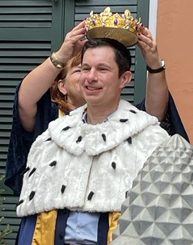 president of L’Union Francaise, the oldest Franco-American nonprofit organization in Louisiana celebrating its 150 anniversary in 2022. Of both French and Cajun heritage, he is passionate about preserving French language and Francophone cultures. He is also the executive assistant to the dean of the School of Liberal Arts at Tulane University. The krewe honors Mr. Mistrot for his ongoing role in celebrating our French heritage.

Also in a royal “horse-drawn” pedicab, he will wear a robe inspired by one of many paintings of the King’s coronation at Reims Cathedral, at which Joan of Arc was present.  At the parade’s end, the king will be ceremoniously crowned by the young Joan Maid of Honor. The two will then cut the first king cake of the season, representing Joan of Arc’s birthday cake as well as Carnival season tradition. The public is welcome and encouraged to bring their own king cake to share and enjoy.