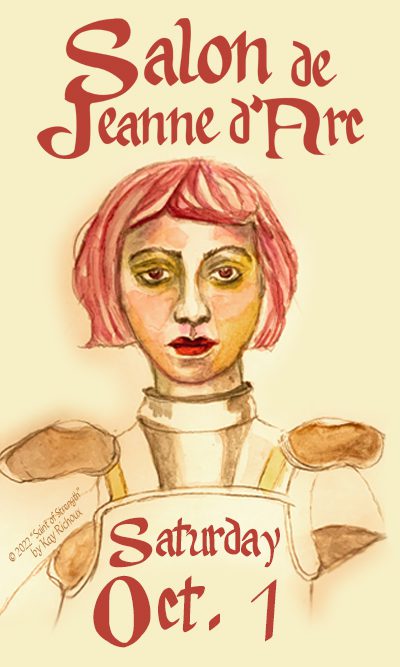 The Joan of Arc Project will present its 12th annual conference, the Salon de Jeanne d’Arc, on Saturday Oct. 1st from 9:00 a.m. to 4:00 p.m. at Woldenberg Art Center at Tulane University.  (full schedule) The free lectures and presentations, in partnership with the Medieval & Early Modern Studies Department at Tulane University will be in the Stone Auditorium in Woldenberg Art Center, with information tables and parade related exhibits in the adjacent Woodward Way Breezeway of the Newcomb Art Museum (map).

Throughout the conference, attendees can meet and greet krewe leaders and members or become a krewe member, and view costumes and other items related to the 15- year-old walking parade that marches each Twelfth Night in the French Quarter on Joan of Arc’s birthday, January 6th.  Members may also purchase throws and other krewe merchandise.

Lectures will be held in Stone Auditorium in Woldenberg Art Center; Krewe de Jeanne d’Arc information tables and meeting and mingling will occur in the Woodward Way Breezeway in the Newcomb Art Museum. (map)

The Event is Free and Open to the Public

Presented by the makers of the annual Joan of Arc Parade

10:15 a.m. SCHOLAR TALK: “Divine Inspiration and Human Imagination in late-Medieval Visions: the Example of Birgitta of Sweden”
The scholar talk will be presented by F. Thomas Luongo, Ph.D., Eva-Lou Joffrian Edwards Professor, Department of Medieval and Early Modern Studies and Department of History, Tulane University. We tend to assume that divine inspiration and human imagination must be opposed to each other. For example, if we say that Jeanne d’Arc imagined her voices, then we mean that she did not really hear them; they were merely “figments” of her imagination. But medieval views of the visionary mind were actually more complex; they assumed a vital role for the imagination. This talk will illustrate this point through the example of a visionary from the generation before Jeanne, Birgitta of Sweden (d. 1373) and her Revelations. In particular, it will explore the illustrations from the earliest manuscripts of the Revelations to show how they explore the relationship of divine inspiration and human imagination in visions. Lungo teaches Medieval European history. He is a historian of religion, with a special interest in mysticism and female sanctity in the later Middle Ages.

11:15 a.m. Author Panel: “French All Around Us: French Language and Francophone Culture in the United States.” Three of the authors from this collection of essays released in 2022 by TBR Books will join our Salon: Joseph Dunn, Georgie Ferguson, and Scott Tilton. For more than 25 years, his understanding of Louisiana’s distinct French and Creole languages, cultures, and heritage has led Joseph Dunn to work at the highest levels of the state’s cultural and tourism industries. In addition to his primary role as director of public relations and marketing at Laura Plantation, Joseph also collaborates on a variety of projects that focus on the social, professional, and economic valorisation of Louisiana French and Creole-speakers. Joseph Dunn was named a Chevalier in the French National Order of Merit in 2021. Georgie Ferguson, Ph.D., is public affairs and communication specialist for the Porte-Au-Chien Indian Tribe. Scott Tilton is the co-founder and director of the Nous Foundation – a cultural institute dedicated to French and Creole in Louisiana and across the United States. Prior to Nous, he worked as a consultant at Ernst & Young France on projects for the European Union, the UN, and the French government. He graduated with a dual degree in Political & Social Thought and Foreign Affairs from the University of Virginia, as well as with a master’s degree in International Relations from Sciences Po Paris. Along with his fellow co-founder Rudy Bazenet, Scott launched and spearheaded the initiative that saw Louisiana become the first U.S. state to join the International Organization of the Francophonie in 2018.

12:15 p.m. Lunch break on the lawn: You can purchase lunch on site from the Crêpes à la Cart and Jamba Juice food trucks, and at 12:30 we’ll enjoy a medieval weapons demonstration.

1:30 p.m. “I want to live and die for God”: Catholic women who transformed the lives of African Americans in New Orleans, by Kim Vaz-Deville, Ph.D.; Dartanya Croff, artist; and Elizabeth Moore Rhodes, Ed.D. This panel will discuss the Venerable Henriette DeLille, Servant of God Thea Bowman, and Saint Katherine Drexel and the Sisters of the Blessed Sacrament. All were deeply connected with New Orleans and all found inspiration in Saint Joan of Arc. Kim Vaz-Deville is the author of The Baby Dolls: Breaking the Race and Gender Barriers of the New Orleans Mardi Gras (LSU Press, 2013) and is the editor of Walking Raddy: The Baby Dolls of New Orleans (UPM, 2018). Elizabeth Moore Rhodes spent her entire professional career teaching in schools and universities.  She retired as an Assistant Professor from Xavier University of Louisiana.  With a degree in Educational Technology, she taught doctoral, master and undergraduate level students in teacher education. She has served on several local boards, including LA Creole Research Association, Alliance Francaise de Nouvelle Orleans, Sojourner Truth Academy and currently serves on the board of Communities in Schools Gulf South Region.  Her area of research is culturalism and its impact on learning communities.  She participated as a child in the Seventh Ward Creole Fiesta parades of the late 50’s and also paraded recently as an Amazon in recent Joan of Arc parades.  Dartanya Lorraine Croff (she/her) is a proud native of Flint, MI. Growing up in a household where creative expression was explored and no idea was ever turned down. In a city like Flint, being an artist comes naturally. Much like New Orleans, Flint is a fighter. At a young age Dartanya knew that singing would always be her first love yet like the arts, you can never have too many connections. From Fa la las to “To Be or Not To Be… That is the question” getting her BFA in Performing Arts Focused in Acting, to Single crochet double crochet Banana Skirts “Thank you Josephine” and Oranges and Honey sprinkled with Cinnamon just the way Oshun likes it… Baby we in Paris now… To just being happy with saying out loud for the world to see, feel, and hear, “I AM A FIBER ARTIST”. This is Dartanya. She is me.

2:30 p.m. “Joan and the Written Word,” moderated by the New Orleans chapter of the Women’s National Book Association. A lively book club discussion of the 2022 historical fiction novel “Joan” by Katherine Chen. (Enjoyable even if you haven’t read the book!)

4:00 p.m. Last chance to visit the merchandise and info tables or network in the breezeway

The purpose of the Joan of Arc Project aka Krewe de Jeanne d’Arc is to honor and celebrate Joan of Arc’s life in unique, artistic, and educational ways, including the production of the annual Joan of Arc parade and Salon de Jeanne d’Arc. We seek to keep Joan’s story and spirit alive by hosting events, workshops, and presentations that illuminate Joan’s heroism and timelessness, while connecting her to the French heritage and pride of New Orleans. As the “Maid of Orleans” inspires citizens of New Orleans and people around the world, we welcome people of all faiths and backgrounds to join in our joyous, New Orleans-style revelry.